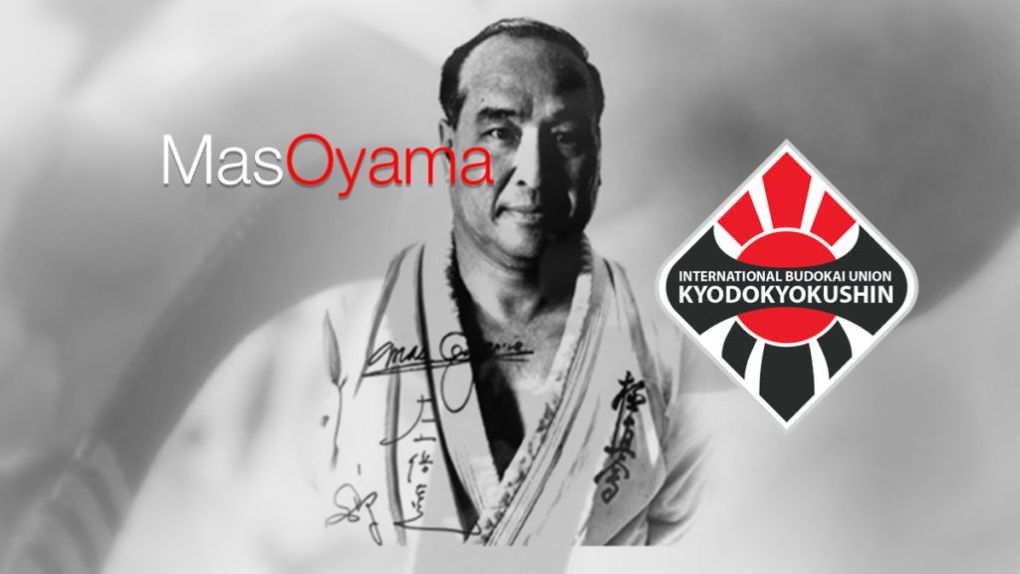 (大山 倍達 Ōyama Masutatsu, born Choi Yeong-eui (Hangul: 최영의 Hanja: 崔永宜); July 27, 1923 – April 26, 1994), more commonly known as Mas Oyama, was a karate master who founded Kyokushin Karate, considered the first and most influential style of full contact karate.[1][2] A Zainichi Korean, he spent most of his life living in Japan and acquired Japanese citizenship in 1964. He was an alumnus of Waseda University.

Mas Oyama was born as Choi Young-Eui (최영의) in Gimje, South Korea, during Japanese occupation. At a young age he was sent to Manchuria, Northeast China to live on his sister’s farm. Oyama began studying Chinese martial arts at age 9 from a Chinese farmer who was working on the farm. His family name was Lee and Oyama said he was his very first teacher. The story of the young Oyama’s life is written in his earlier books.

In March 1938, Oyama left for Japan following his brother who enrolled in the Yamanashi Aviation School Imperial Japanese Army aviation school. Sometime during his time in Japan, Choi Young-Eui chose his Japanese name, Oyama Masutatsu (大山 倍達), which is a transliteration of Baedal (倍達). Baedal was an ancient Korean kingdom known in Japan during Oyama’s time as „Ancient Joseon”.

One story of Oyama’s youth involves Lee giving young Oyama a seed which he was to plant; when it sprouted, he was to jump over it one hundred times every day. As the seed grew and became a plant, Oyama later said, „I was able to jump between walls back and forth easily.” The writer, Ikki Kajiwara, and the publisher of the comics based the story on the life experience Oyama spoke to them about – thus the title became „Karate Baka Ichidai” (Karate Fanatic).

In 1963, Oyama wrote What is Karate which became a best seller in the US and sold million copies all over the world. It is still considered by many to be the „Bible” of Karate to this day. It was translated into Hungarian, French, and English.

In 1945 after the war ended, Oyama left the aviation school. He began „Eiwa Karate Research Center” in Suginami ward but closed it quickly because „I soon realized that I was an unwanted Korean. Nobody would rent me a room.” He finally found a place to live in Tokyo. This is where he met his future wife whose mother ran a dormitory for university students.

In 1946, Oyama enrolled in Waseda University School of Education to study sports science.

Wanting the best in instruction, he contacted the Shotokan dojo (Karate school) operated by Gigō Funakoshi, the second son of karate master and Shotokan founder Gichin Funakoshi. He became a student, and began his lifelong career in Karate. Feeling like a foreigner in a strange land, he remained isolated and trained in solitude.

Oyama attended Takushoku University in Tokyo and was accepted as a student at the dojo of Gichin Funakoshi. He trained with Funakoshi for two years, then studied Gōjū-ryū karate for several years with So Nei Chu (조영주 / 曺（曹）寧柱, 1908–1995), a senior student of the system’s founder, Chojun Miyagi. So was a fellow Korean from Oyama’s native province.

Korea had been officially annexed by Japan since 1910. During World War II (1939–1945) there was much unrest throughout Korea. As South Korea began to fight against North Korea over political ideology, Oyama became increasingly distressed. He recounts, „though I was born and bred in Korea, I had unconsciously made myself liberal; I felt repulsion against the strong feudal system of my fatherland, and that was one of the reasons which made me run away from home to Japan.” He joined a Korean political organization in Japan to strive for the unification of Korea, but soon was being targeted and harassed by the Japanese police. He then consulted with Mr. So.

Around the time he also went around Tokyo getting in fights with the U.S. Military Police. He later reminisced those times in a television interview, „Itsumitemo Haran Banjyo” (Nihon Television), „I lost many friends during the war- the very morning of their departure as Kamikaze pilots, we had breakfast together and in the evening their seats were empty. After the war ended, I was angry- so I fought as many U.S. military as I could, until my portrait was all over the police station.” At this time, Mr. So suggested that Oyama retreat to a lone mountain for solace to train his mind and body. He set out to spend three years on Mt. Minobu in Yamanashi Prefecture, Japan. Oyama built a shack on the side of the mountain. One of his students named Yashiro accompanied him, but after the rigors of this isolated training, with no modern conveniences, the student snuck away one night, and left Oyama alone. With only monthly visits from a friend in the town of Tateyama in Chiba Prefecture, the loneliness and harsh training became grueling. Oyama began to doubt his decision, so he sent a letter to the man who suggested the retreat. Mr. So replied with encouragement to remain, and suggested that he shave off one eyebrow so that he would not be tempted to come out of the mountain and let anyone see him that way. Oyama remained on the mountain for fourteen months, and returned to Tokyo a much stronger and fiercer Karateka.

Oyama gave great credit to reading The Book of Five Rings by Miyamoto Musashi, a famous Japanese swordsman, to change his life completely. He recounts this book as being his only reading material during his mountain training years.

He was forced to leave his mountain retreat after his sponsor had stopped supporting him. Months later, after he had won the Karate Section of Japanese National Martial Arts Championships, he was distraught that he had not reached his original goal to train in the mountains for three years, so he went into solitude again, this time on Mt. Kiyosumi in Chiba Prefecture, Japan and he trained there for 18 months.

In 1953 Oyama opened his own karate dojo, named Oyama Dojo (form of Gōjū-ryū), in Tokyo but continued to travel around Japan and the world giving martial arts demonstrations, including the fighting and killing of live bulls with his bare hands (sometimes grabbing them by the horn, and snapping the horn off). His dojo was first located outside in an empty lot but eventually moved into a ballet school in 1956. The senior instructors under him were T. Nakamura, K. Mizushima, E. Yasuda, M. ishibashi, and T. Minamimoto. Oyama’s own curriculum soon developed a reputation as a tough, intense, hard-hitting but practical style which was finally named Kyokushinkai (Japan Karate-Do Kyokushinkai), which means 'the ultimate truth,’ in a ceremony in 1957. He also developed a reputation for being 'rough’ with his students, as the training sessions were grueling and students injuring themselves in practice fighting (kumite) was quite common. Along with practice fighting that distinguished Oyama’s teaching style from other karate schools, emphasis on breaking objects such as boards, tiles, or bricks to measure one’s offensive ability became Kyokushin’s trademark. Oyama believed in the practical application of karate and declared that ignoring 'breaking practice is no more useful than a fruit tree that bears no fruit. As the reputation of the dojo grew students were attracted to come to train there from inside and outside Japan and the number of students grew. Many of the eventual senior leaders of today’s various Kyokushin based organisations began training in the style during this time. In 1964 Oyama moved the dojo into the building that would from then on serve as the Kyokushin home dojo and world headquarters. In connection with this he also formally founded the 'International Karate Organization Kyokushin kaikan’ (commonly abbreviated to IKO or IKOK) to organise the many schools that were by then teaching the kyokushin style.

In 1961 at the All-Japan Student Open Karate Championship, one of Oyama’s students, Tadashi Nakamura, at 19 years old (1961) made his first tournament appearance, where he was placed first. Nakamura later became Mas Oyama’s Chief Instructor as referenced in Mas Oyama’s book, „This is Karate.” In 1969, Oyama staged the first All-Japan Full Contact Karate Open Championships which took Japan by storm and Terutomo Yamazaki became the first champion, which have been held every year since. In 1975, the first World Full Contact Karate Open Championships were held in Tokyo. World championships have been held at four-yearly intervals since. After formally establishing Kyokushin-kai, Oyama directed the organization through a period of expansion. Oyama and his staff of hand-picked instructors displayed great ability in marketing the style and gaining new members. Oyama would choose an instructor to open a dojo in another town or city in Japan, whereupon the instructor would move to that town, and, typically demonstrate his karate skills in public places, such as at the civic gymnasium, the local police gym (where many judo students would practice), a local park, or conduct martial arts demonstrations at local festivals or school events. In this way, the instructor would soon gain a few students for his new dojo. After that, word of mouth would spread through the local area until the dojo had a dedicated core of students. Oyama also sent instructors to other countries such as the United States, Netherlands, England, Australia and Brazil to spread Kyokushin in the same way. Oyama also promoted Kyokushin by holding The All-Japan Full Contact Karate Open Championships every year and World Full Contact Karate Open Championships once every four years in which anyone could enter from any style